my birthday, while taking a year off from making a big deal of it, was fantastic. i got a ride back into town the day before with an avid skydiver that let me hold his gun. smiling friends awaited us at a crowned berkeley bar. and at the stroke of midnight, jessica, as well as the entire room, forced me to chug a beer while standing on the bar. the next night, being my actual birthday, a handful of friends came out to see rvivr, underground railroad, and the bananas at submission gallery. the whole show was so celebratory and everyone there was so intoxicated with joy. erica from rvivr read a 2 minutes speech about sexual consent and the room was silent until she was done, when everyone applauded. it was one of those increasingly rare occasions that made me feel so good to be a punk.

and made me wanna pat the back of the scene that still exists within that which often rears its ugly head as a microcrosm for our fucked society.

this summer has been so fantastic. i established goals and accomplished them all without ever thinking i actually would (take that, "the secret"!). i went on tour with my best friends, dove into swimming holes beyond several state lines (thanks laura v), made a zine that is sold in stores, dined with hundreds of weirdos at the colony of libertatia, quit my job, and didn't read enough. my 3 classes have since started and i love them all. if i could spend 12 hours a day printing color photos, i think i would. the little squat on the prairie is in full force, and we're putting in a tattoo studio. cats are cool. my head hurts a little. 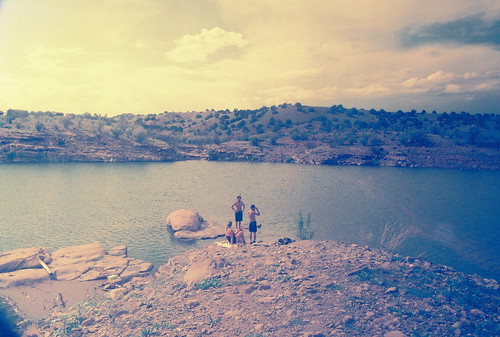 i just had a dream that i lived in san francisco and we had a teeny house and my dad kept showing up and telling my friends which cigarettes he preferred and then he told me i needed a new bike and that he'd put twenty dollars on it. it was weird

last night, driving away from a karaoke bar, hector and i were pretty damn drunk singing every song on less talk more rock and potemkin city limits (it was a long drive) at the top of our lungs. some man in a suit came up to our window and threateningly asked us if we were talking shit. we said no and he said "oh sorry, nevermind" and the light turned green. apparently, at this point i stuck my head out the window and yelled "POKE HER IN THE BUTT" and the angry man started chasing our car. he was so pissed.

when i was in kindergarden (the first time), my classmate lived across the street. i think his dad's name was kyle. kyle drove us to school every day and listened to queen a lot. come to think about it, maybe the kid's name was kyle. whats the difference? as we arrived at our destination ever morning, his father would always tell us "today is the first day of the rest of [our] lives." i'm glad he told me that.


and now i'll make pesto for the family..

i went to visit the homeland this weekend. we got really trashed in the way only southern california can. it was fun, like eating chipotle after you haven't had chipotle for a while. i had a very long food to-do list but i only got to a couple restaurants. but they (happy family, veggie grill, wheel) were good. and it was great seeing everybody. i got my bag searched on the way back to o-town and they were really kind about it. i'm doing kinda well in school but i sorta don't give a shit. ftw. we got a fourth housemate and its fantastic. i can't wait for the weekend, or well, the minute i get out of class today. i need to study more for my anthropology test, clean my room and buy kale.

i had a dream that our car got into a huge accident involving tidal waves (from all directions). someone stole out computers. a member of the vehicle's limbs disappeared. i was really worried about a paper i have to write and kept waking up scared that i failed.

this weekend was fun. it was full of paddle (is it peddle or paddle?) boating, a cemetery, great conversations, burritos, losing a car, beer drinking, birthday parties/gallery shows/keggers, urban recycling finds, and a bunch of other stuff i forget. at school, i got a tough paper back that i was stressing on. i got an A. i just made "chicken" salad and something was definitely missing, until i mixed in a buttload of nutritional yeast. i love mayonnaise. i can't wait for the anarchist bookfair and seeing old friends and also seeing sina and everyone coming up for spring break. i'm so addicted to reviewing things on yelp.com. i went to a free kegger at the oakland museum the other night. it was exactly as such an unlikely event would be: awesome! i'm only writing this entry to escape the studying i should be doing right now. i like turtles.

last night we rode our bikes to an s&m themed party at a huge coop. it was wonderful watching the ex-marine get flogged. leif and i bought a grill at the humongous urban recycling warehouse, and i already invited some swedish study abroad students to our first bbq. they really like california, and so do i. valentine's party plans all dissolved into the simple pleasure of some friends coming over, drinking shit beer and giving each other stick and pokes. its such a beautiful day today. i can't decide whether to go to a neighbor's birthday party, bar hop in the city or drive to santa cruz for a "safe sex party". and don't even get me started on dinner. i should probably read too. the dollar curry house is what dreams are made of. i need to find some charcoal. and we just found out we have an attic.

i got my REPUBLICAN ballot in the mail